This is the part where I review a…… “oh not this one.” Here we go again.

Do you know those times when you see something that could be the next big thing? Or maybe you just want to try something different that seems like maybe it could work out for you. Well, that’s Yongery. The cheap version of Godzilla and the not so appealing monster to Gamera. Is hate a strong word? Yes, it is.

Reminder all links provided and pictures are from amazon 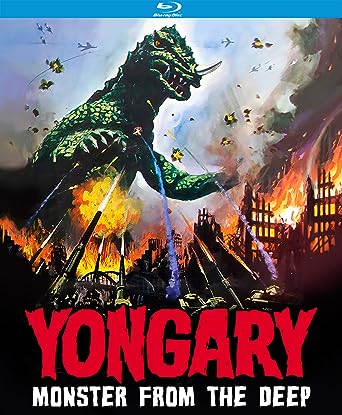 But let me start from the very beginning where you had a little boy who just watched the last Godzilla movie he ever had. (Godzilla vs Destroyah) So if any of you know that story, I wanted a monster movie to take my mind off of that moment. That’s when the family decided to go looking for a yard sale cure for my little mind. (Boy oh Boy was that bad .)

So to start just want to say that this is going down in history as to why did I do this type of moment here?

a nuclear test in the middle east. Of course, the cold war is going on at the time so naturally, it’s life or death.

Don’t get me wrong I know how the cold war is. Heck, even my mother lived through it and she still wonders why something millions of miles away had to affect everyone.

But I digress on that. The concept was good where something bad happened in the nuclear test to cause a massive earthquake that rips the Hwanghae province to pieces to the point where martial law is placed.

The quake strikes Panmunjom and low and beholds outcomes Yongery. You can tell in the shot they were just trying to imitate TOHO and cash in on the monster explosion of the ’50s

Coming Out Of The Woodwork

“After” the quake a photographer sees some movement inside the crack like something is living inside. In a panic, the photographer tries to escape but the car crashes in the quake. Somehow the photographer manages to reach the police and tells them that the monster is causing the quakes. And out of nowhere, they conclude that it’s a mythical monster from south Korean myth, is Yongery.

Like no build-up or nothing like that. (In the TOHO movie Rodan, you had a build-up where the main character ended up being lost in a plot twist earlier that caused him to lose his memory and gaining it by a trigger that reveals the monster we know call Rodan.) South Korea is being evacuated and the military is running out of options.

A scientist named Ill Wo made a decision and goes to the capital to find a weakness in Yongery and needless to say Yongery ends up attacking the city and brings the only thing that got attention from me.

The Worst Death You Could Imagine

Yongery is on the rampage when the astronaut sees the monster eats gasoline and oil. (like a certain fire-breathing turtle we know of.)As soon as he turns off the main tank of an oil field Yongery starts to go berserk and attacks a tank. For some weird reason, it made the monster inch profusely eventually Ill wo figures out about the reaction Yongary and finds a solution to the problem. (Even though I don’t care too much for this movie I still don’t like spoiling movies for some of you but for those of you who have), you can understand the title above very clearly.

Yongary monster from the deep.

So here are the links to that movie I talk about along with the remake for that same movie.

I might do a review on Reptilian later whenever I could buy it so you guys can laugh at my expense.

Another End To Our Story

I really don’t like this movie. It’s okay when you have something new to try out and see if it can work in your favor but this movie likes to establish itself as the next Godzilla or Gamera movie in no way shape or form is the next big movie anywhere in the monster verse in my opinion. I mean this is a movie that just didn’t bring those rememberable moments to me as a kid.

Like the Godzilla vs Destroyah moments that were so sad, I still remember how badly I cried over the death of an awesome character.
That might be a review after I start my King Kong review in a moment.

I also want to thank my viewers who look at this content I make. I also want to ask an opinion from any of you who are currently following me on this website. Should I add ads as well on my site or stick to just the links? I want to get this into a full-time position. So that way I make more content freely and add more value to a lot of the searches

I could just go off on a tangent and beg for you guys to click my links and buy. I won’t though, You were kind enough to visit my website and read through my posts. That is not something I take lightly. I have seen YouTubers have great success on the platform and seem to live the lifestyle they wanted. I also don’t think me just spouting off on different social media sites would solve every single problem you might have in your life.

I see that is best saved for looking for different things you like. The fact that you have chosen this site to do your shopping for your monster needs is the best part of making this website. You guys like the content and love my blogs and how I review different things here. I will definitely make more posts after this.

Just a little about me is I like monster movies and love educating people with blogs and content. View all posts by Vic

5 thoughts on “Yongery monster from the deep or what?”